A downloadable game for Windows and macOS

Dino Dearest is a game about winning the hearts of a variety of dinosaurs and prehistoric dinosaur-like animals. If you like wildly branching storylines, cool music, parallax, or being consumed by spaghetti, this game might be for you.

We (a handful of game design students at the Rensselaer Polytechnic Institute) are making this game as a labor of love. The version we're presenting for download here is essentially a demo - it was used to show off the game at a local showcase.

We're still working on, it, though - and probably will be for a while! Feedback is very welcome, as are some inevitable bug reports.

Please feel free to download it for free! Of course, if you really dig it, donations are a huge compliment.

Oh, by the way - if you want to see how the game progresses as it's developed, you can follow DANG! (or Ben, or Dorian, or Perrin, or Fuller, or Sam, or Janice) on Twitter. This project is mostly on hold while class projects take up every waking moment of our time, but one day the sun will rise again on Dino Dearest. One day. You'll see. You'll all see.

I included your game in this article that I wrote. https://www.theodysseyonline.com/15-of-the-most-wtf-am-doing-with-my-life-dating-sims

Bruh this game was too cute.

I can't court Persephone for some reason? I've seen vids where people do but I can't.

I don't know if this game is better than Hatoful Boyfriend and that's a dilemma for me, but I played it and dated my favourite dinosaur and then the game called me Trash, HOW DID IT KNOW.

This game was a lot of fun :D

This was a really cool game and I can't wait to see the finished product. There was a small continuity error when you meet Scarlet/Spike(?) and get the bad Sex Offender ending, the screen doesn't fade to black before the narration starts. Don't know if this was important, just noticed it was different.

A T-Rex please. I need it to happen so badly XD I love the game though!!!

Alright... so I decided to be a happy camper and just please Persephone all day. HOLY HELL I WAS NOT EXPECTING THAT ENDING. I didn't even think dating her was possible. Dear lord that was quite the satanic little adventure. All in all this game is 9/10 - needs more dino bewbs.

LOVE this game so far! Even though all I did was laugh for ten minutes and die like three times https://www.youtube.com/watch?v=oI_dzyAFr7w

Omg what a great game! The dialoge is so cute and I romanced Duke straight away! Hope more than just a demo gets released and we get to enjoy more dino dating ^_^

This is super cute!! The game itself is adorable and sweet, the writing is INCREDIBLE i love it so much ; u ;

but i have. a pretty major complaint. about the accuracy? like i realize this is very simplified and cutesy but. you wouldnt, say, put a hairless dog in a game because its a stylized version of a fluffy dog. plus, games and media influence the public's view of dinosaurs and other prehistoric creatures in a very big way! so, a few things ive noticed:

-stilts is a pteranodon, not a pterodactyl! pterodactyls didnt have those iconic crests! plus, they were covered in fur-like pycnofibres, like a fluffy coat of fur. also, the tips of his wings should be rounded, not at a sharp point! rounding them out would help both accuracy and cuteness! :D

-spike's legs should be about the same length as her arms! spinosaurs had fairly short legs, as weve discovered in recent years! the sail is also the wrong shape, but that can be excused because of cuteness and simplicity. her hand also look to be poitning downwards, but again, simplicity. (luckily for spike, unlike most theropods, we dont actually have any evidence of them having feathers, so her without floof is perfectly plausible!)

-i don't really know whats going on with the bumps on persephone's back? that might just be stylization tho

-pretty minor, but duke should probably have a row of spines along his back iirc? i may be wrong on that one though.

Wow! Thanks so much for all the detailed feedback and notes! Lots of stuff here that none of us realized. We're working on a much bigger, more elaborate version of the game now, and I think we'll definitely try to keep a closer eye on realism going forward (as far as anatomy goes, anyway). Yeah, it's a silly and stylized game, but you're right. There's no reason to spread misinformation, and attention to detail is never a bad thing anyway.

Glad you liked it! Thanks for caring. <3

Yoooo, Spike/Scarlet is bae! <3 Persephone sucks! No one hurts my precious Spike D;

Also, I like one of Mikey's dialogue branches is bugged. The dialogue box disappeared for me after clicking "Running?"

Huh, that's strange. Thanks for the bug report!

I take it this is a bad ending?

I really liked this game, I thought the diolague was funny and the visuals were something I've never seen before (And that's not an complaint :P). I also made a video if you're interested in seeing my impression!

I love this game so much, oh my gosh. Everybody is so cute and the art and humour are superb and I wanna smooch every single dino in this game! Mikey and Persephone are my favourites! The music gives me good vibes, I dunno why. There's an issue with dialogue choices being too long for the text box and there's some weird typos, but those are the only flaws I've seen so far. I personally am gonna exhaust this game to its very limits until I'm dino-sore because I love it so much. Yes, that's a bad pun. I love this game...

Very fun game. Died of running first, but eventually got to enjoy a life of bloodshed. Revelled in success. :) Will post my let's play soon.

Here it is, my channel is loving it and my friends are starting to play this too. You made a masterpiece, are you planning on making more games in the future? 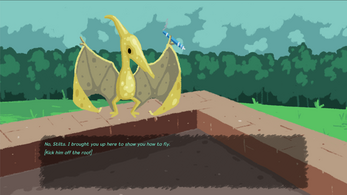 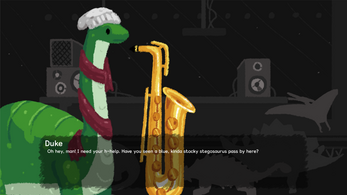 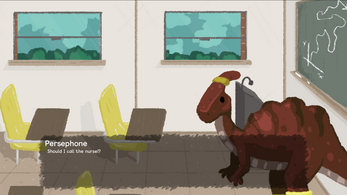